Dear Alice, The machines are working well now. Thank you for your support and patience to solve our problems and give us very useful suggestions in negotiation. Really a good cooperation.

I have received the spring hammers, they are great!

Yes we got the probes and our engineers like them. Thanks.

This is to confirm the order has been well received and all is in good order. May I thank you for your very professional service.This has been a pleasant transaction.

1. Introduction
Draught-proof enclosure is designed according to IEC60598.1 annex D. The size of draught-proof enclosure can be customized. It is applied to thermal test of luminaire under the conditions of normal operation and abnormal operation. The draught-proof enclosure is rectangular, with a double skin on top and on at least three side, and with a solid base. The double skins are of perforated metal, spaced approximately 150mm apart, with regular perforations of 1mm to 2mm diameter, occupying about 40% of the whole area of each skin. At the top of enclosure shall mounted a ceiling plate or a dismountable hanging bracket with a hook to fix the luminaire at the ceiling. At the bottom of side of enclosure shall install inlet hole for the purpose of wire connection. For the sake of install luminaire, the enclosure equip with a sample holder, as per the standard, 2-layer black solid-board is applied to fix the luminaire under test. 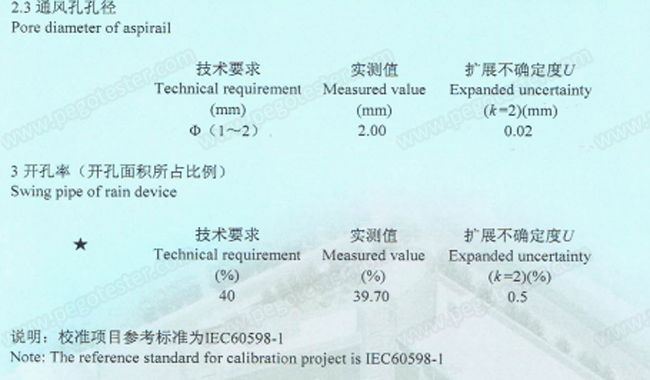 1. The draught-proof enclosure is rectangular, with a double skin on top and on at least three sides, and with a solid base. The double skins are of perforated metal, spaced approximately 150 mm apart, with regular perforations of 1 mm to 2 mm diameter, occupying about 40 % of the whole area of each skin.
2. The internal surfaces are painted with a matt paint. The three principal internal dimensions are each at least 900 mm. There shall be a clearance of at least 200 mm between the internal surfaces and any part of the largest luminaire for which the enclosure is designed.
NOTE: If it is required to test two or more luminaires in a large enclosure, care should be taken that radiation from one luminaire cannot affect any other.

3. There is a clearance of at least 300 mm above the top of the enclosure and around the perforated sides. The enclosure is at a location protected as far as possible from draughts and sudden changes in air temperature; it is also protected from sources of radiant heat.

4. A luminaire under test is positioned as far away as possible from the six internal surfaces of the enclosure. The luminaire is mounted (subject to the requirements of 12.4.1 and 12.5.1) as under service conditions.
5. A luminaire for direct fixing to a ceiling or wall should be fixed to a mounting surface comprising a wood or wood-fibre board. A non-combustible insulating material is used if the luminaire is not suitable for mounting on a combustible surface. The board is 15 mm to 20 mm thick, and extends not less than 100 mm (but preferably not more than 200 mm) beyond the normal projection of the smoothed outline of the luminaire. There is a clearance of at least 100 mm between the board and the internal surfaces of the enclosure. The board is painted black with a matt non-metallic paint.
A luminaire for corner-fixing is fixed in a corner comprising two boards, each complying with the preceding requirements.
A third board is required if the luminaire is to be fixed in a vertical corner immediately below a simulated ceiling.
Luminaires shall not cause the recess to attain temperatures likely to cause a hazard or fire risk and compliance is checked by the following test.
Recessed luminaires are mounted in a test recess, consisting of a suspended ceiling, on top of which is a rectangular box with vertical sides and horizontal top.
The suspended ceiling is made of a 12 mm thick porous wood-fibre board, in which a suitable opening has been made for the luminaire. The wood-fibre board shall extend at least 100 mm outside the projection of the luminaire on this board. The vertical sides of the box are made of 19 mm thick laminated wood and the top of 12 mm thick porous wood-fibre board tightly sealed to the sides.
a) Luminaires for recessing into ceilings with thermal insulating material covering the
Luminaire Sealed box with thermal insulating material tightly fitted to the outside of the box. The thermal insulation shall be equivalent to two 10 cm thick layers of mineral wool with a coefficient of thermal resistivity of 0,04 W/(m.K). Thinner layers can be used when having a higher thermal resistivity. The thermal resistance of the test box shall in any case be at least 5 m2 K/W.
b) Luminaires for recessing into ceilings but not suitable for covering with thermal insulating material
For recessed luminaires of this kind, the test recess shall be of the same materials as described above.
The sides and top of the box shall be spaced from the luminaire in accordance with the manufacturer’s instructions supplied with the luminaire. If no spacing is specified, the sealed box shall touch the luminaire all around.
If a luminaire is provided with separate parts intended for recessed mounting, (for example, with separate lamp enclosure and control gear enclosure), the test recess shall be constructed as a single box observing the manufacturers recommendations for minimum spacing between parts and the inside of the recess (see Figure D.1). Where spacing between parts is not specified (item a of Figure D.1), separate test recesses shall be used for each part.

Shippment: by sea or air